State of the Union Address:

Opened with Make America great again for all Americans

High praises for our Cajun navy rescuing people, strangers shielding strangers at Las Vegas. He introduced Ashley Leppert who saved more than 40 lives in Houston during Hurricane Harvey and David Dahlberg for his heroic efforts during the California wildfires.

In times of trouble we unite as Americans. We are with you, we love you and we will always pull through together. Always.

When Steve Scalise was shot, he worked hard and was back at work in 3 months. During this time, congress came together as reps of the people. President Trump called upon all of us to come together and seek out the common ground. This is the key to representing the people we serve. The state of our union is strong because our people are strong. Together we are building.

Our rebuilding efforts are showing results of 2.4. Million new jobs including 200,000 in manufacturing alone. We have rising wages after years of stagnation. Unemployment is at a 45 year low. African America unemployment at lowest rate ever recorded. Hispanic unemployment is lowest levels in history. Small business confidence all time high. 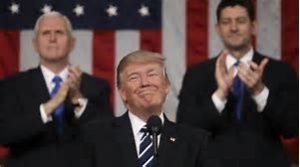 Financially, we have grown 8 trillion dollars in value in stock market. 401k retirement and pensions have increased. We have passed the biggest tax cuts and reforms in American history bringing relief for middle class and small businesses.
Tax reform has doubled the standard deduction for everyone and doubled the child tax credit, eliminated individual mandate and fines for lack of insurance.

Slashing business tax rate enables American companies to compete and win against any other country in the world.

This means that the average family will receive $4000 more income per family.
3 million workers already have tax cut bonuses. Apple is investing 350 billion dollars in the American economy by hiring another 20k workers. Exxon Mobile has pledged 50 billion in investments into the U. S. economy.

Americans can dream anything, be anything and together we can achieve absolutely anything. One team, one people. Share same home, same heart, same destiny and same flag! Rediscover the American way. Faith and family is the center of American life. In God we trust!

We celebrate our police, military and veterans who deserve our unwavering support. We will be totally defending our 2nd amendment and protecting our religious freedoms.

We have enacted the VA Accountability Act , (click here for detailed article) which has already removed 1500 bad employees and replaced them with people who love our vets as much as we do. Veterans now have a choice in their healthcare. We will not stop until veterans are properly taken care of as promised.

Similarly, across all government offices, we call on Congress to reward good workers and to remove workers who undermine and fail the people.

This administration has eliminated more regulations in one year than any administration in history, ending war on energy and beautiful clean coal. We are now exporting energy to the world. We ended mandates hurting our auto industry to get that industry growing again. Chrysler is moving a plant back from Mexico, Toyota and Mazda will be building plants here. Companies are coming back!!!!

FDA approved more new drugs and devices than ever before in history. Patients with terminal conditions should have access to experimental treatments here at home instead of country hopping to find cures. Congress needs to give right to try experimental treatments. One of our greatest priorities is to Reduce prices of prescription drugs. Many countries are vastly cheaper. Prices will come down. Watch.

Unfair trade deals have caused us to lose our wealth. Trade relationships will be fair and reciprocal.

As we rebuild industry we will rebuild our crumbling infrastructure. We are a nation of builders. Empire State Building was built in one year. Some projects permit process can take sometimes 10 yrs. we are calling on Congress to raise 1.5 trillion for infrastructure investment and streamlining permit approval process to 2 years.

We need to
Invest in work development and job training.
Open vocational schools.
Support paid family leave.
Prison reform to help inmates get second chance at life.
Immigration policies that focus on best interests of American workers and American families. Immigrant Criminals will not be tolerated.
Close loopholes that allow criminals to come into our country.

Our first priorities are AMERICAS citizens.

1.    Path to citizenship for kids brought illegally by their parents who show good character etc
2.    Fully secure the border
3.    End visa lottery and use merit based program
4.    End chain migration

Come together put politics aside and get the job done!

Tougher punishment for drug dealers and manufacturers is greatly needed.

End defense sequester and fully fund our great military. Modernize and rebuild our nuclear arsenals to deter aggression from any nation

Terrorists are not criminals they are enemy combatants. We have released hundreds to see again on the battlefield. No more. Gitmo stays open.

New rules of engagement: no longer undermined by timelines. We no longer tell the enemy our plans.

Jerusalem is capital of Israel. U N aid only go to friends of America not enemies of America.

America stands with the people of Iran in their quest for freedom. Denounce communist regime of Cuba and Venezuela and North Korea’s depraved regime.

With Faith in our citizens and trust in our God, we will never fail. We will be safe, strong, mighty and free! 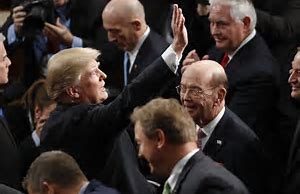