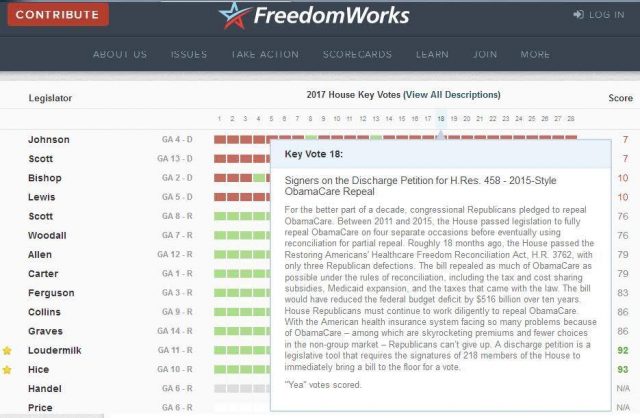 Repeal of Obamacare, read more below and see what YOU can do!

Obamacare, tax reform, and other topics have become partisan fights. Mr. Quagliaroli challenges citizens to move beyond partisanship and demand results from Congress. Citizens should demand that action be taken by elected officials.

CALL CONGRESS. HAS YOUR CONGRESSMAN BETRAYED YOU…find out if they signed the recent petition to repeal Obamacare that was just proposed.IN A NUTSHELL;
1. In August, House Conservatives started a petition to force a vote to repeal
Obamacare ( the same bill they all voted for in 2015)
2. All it takes is for 218 members of the House to sign the petition to force a vote on repealing Obamacare.
3. NINE out of the ten Republicans in Georgia joined the Democrats and have so far refused to sign on to the petition that would make a vote repealing Obamacare possible.
4. This is a petition, it does not expire.  There is no set date to sign it, your member of can sign it any day of the week.

5. For details and to find out (1) what you can do and (2) to find out if your congressman was one of the ones who betrayed you,and refused to sign the petition, see information below and the attached documents from FreedomWorks.

THE POLITICIANS THINK WE ARE STUPID, LET’S PROVE THEM WRONG AND CALL!

CALL YOUR CONGRESSMAN-I am told they are falling off their chairs laughing because they received so few calls on this. Republicans do not know how to fight, but they do know how to count, and count calls they do.

THESE REPUBLICANS NEED TO GET 100’s of calls, because to them, no calls means no action is needed, and many calls means…the natives are restless, we better do something. Right now they’re not at all worried about going back on their word and are more concerned with heat from leadership than from back home.

ONE LAST THOUGHT-Repealing Obamacare is the ONE THING they all promised to do…over and over again. IF WE LET THEM GET AWAY WITH THIS, they will never listen to another word we say…why should they? It will be confirmation that we really are, TOO STUPID to stop them from doing anything they want, as long as they just tell us what we want to hear and give us a little pat on the head when they are back in the district.

WERE YOU BETRAYED? To find out if your congressman signed the petition and is serious about repealing Obamacare, check the list on Congressman Garrett’s website (item# 3). and while the first two documents shown here, (items 1&2) refer to actions of Georgia congressman, you can go to the FreedomWorks website and pull up your state if you don’t live in Georgia.

There are 4 things you can do;
1. Read Item #1 at the top of the page. That explains the discharge petition and gives the number (H.Res 458, it will help to have that # when you call)
2. Your have to multiply yourself. Share this to your Facebook page and as many others as possible
3. Call your member of congress THIS WEEK. All you have to say is; Did so & so sign on to the petition, if not, ask them to please do. Remember, you will most likely be talking to a 20 year old intern so be polite.
4. GET YOUR SPOUSE TO CALL AS WELL, THAT ALONE WILL DOUBLE THE NUMBER OF CALLS THEY GET

Here is a list of the phone # to call if you are if you are in Georgia (it’s best to call their Washington Office where they count the calls…They each need to get 100’s of calls. P.S. Knowledge is NOT power…if you don’t act on it. Just knowing about the betrayal by your congressman will not do anything about it, you have to act on it and CALL THIS WEEK! They think we are stupid, lets prove them wrong!

I, PERSONALLY AM MAD AS HELL AND NOT GOING TO TAKE IT ANYMORE.
As an example;
1. I was paying $362.91 per month for great health insurance in 2008.
2. My 2017 Obamacare health insurance bill was $890.00 PER MONTH for garbage insurance! ($7,000.00 deductible)
3. In 2016, I spent 4 frustrating days trying to get insurance. On many occasions the Obamacare website said; “Sorry, there’s a problem with our system, please log out and then try again”
4. I was just notified that my current healthcare insurance company was pulling out of the market. It was the 3rd company in 3 years that I have had. I now have to look for my 4th health insurance company in 4 years and God only knows what I will have to pay for insurance for my family. 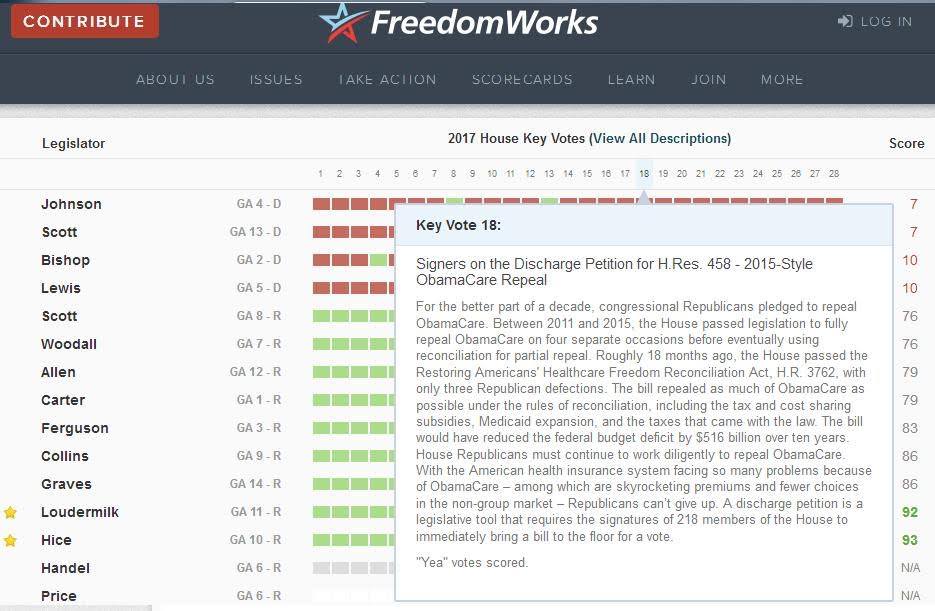 #2. The Scorecard Page from the FreedomWorks website showing that only one Republican Congressman from Georgia signed the petition to take a vote on repealing Obamacare. That means that 9 out of the 10 Republicans in Georgia JOINED THE DEMOCRATS in Georgia and did not sign the petition that would have given them the opportunity to vote on repealing Obamacare. Green is yes and red is no. (If you are not from Georgia, check your state at FreedomWorks.) 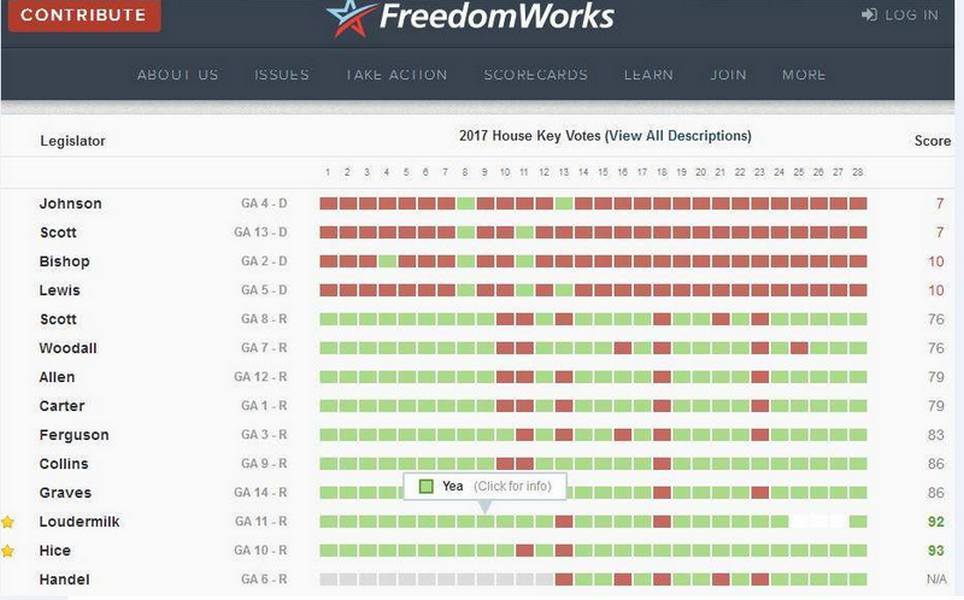 #3. The Home Page of Congressman Tom Garrett from Virginia, listing all those who did sign the petition and thanking them for signing on to vote to repeat Obamacare. 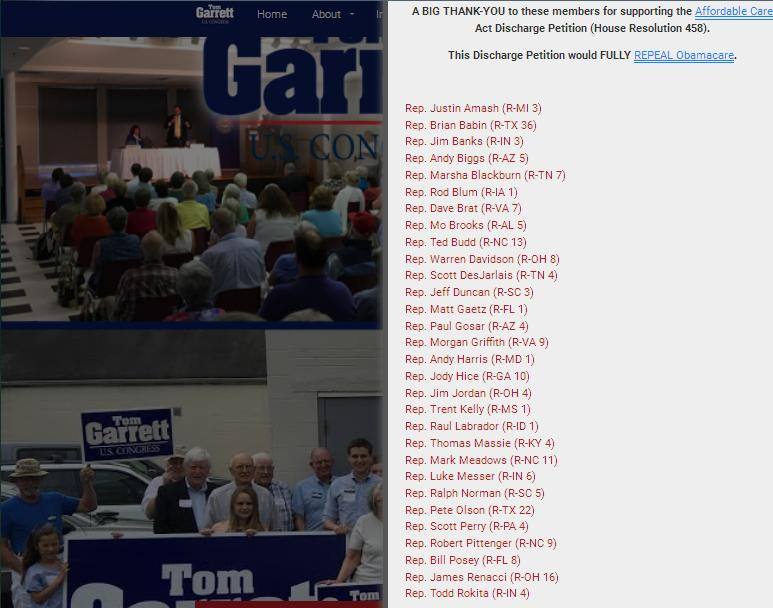 THE ABOVE INFORMATION is difficult to obtain. I spent a half day digging it out. The petition was not voted on on the house floor, so you can not Google it, or find it on all the watchdog group pages that have scorecards, because they only track votes. For that reason, I am sure that is why many in Congress have not signed the petition. This is an obscure procedure that is not recorded by Congress so I’m sure they felt YOU AND I WOULD NEVER KNOW ABOUT IT!

This information is accurate as of Oct 23, 2017. Both the FreedomWorks and Congressman’s websites report the actions (or lack of action) on the part of the Georgia Republican Delegation and verify each other. If you will lean on your congressman, together, we can get more of them to do what we sent them there to do, and what they SAID THEY WOULD DO….REPEAL OBAMACARE!

IF YOUR CONGRESSMAN’S NAME IS NOT ON CONGRESSMAN GARRETT’S LIST. OR LISTED AS A NO, ON THE FREEDOMWORKS SCORECARD, CALL THEIR OFFICE this week and ask them to sign on to the petition to force a vote on Obamacare repeal in the House. This will give us a 2nd bite at the apple in the House.

We will then know who the liars and saboteurs are in both the House and the Senate who are causing us to suffer under Obamacare.

IF THEIR OFFICE TELLS YOU THEY SIGNED THE PETITION…ASK THEM TO HAVE FreedomWorks AND Congressman Garrett update their websites. AND YOU WILL GET BACK TO THEM IN 30 DAYS AFTER YOU HAVE CHECKED THESE TWO SITES. (all you have to do is Google FreedomWorks.org andtomgarrettforcongress.com)

THE FOLLOWING IS THE EXPLANATION GIVEN BY THE FREEDOM CAUCUS;
“This is an effort by House conservatives to force a vote on the bill most already supported before, but also to get members on the record for or against clean repeal,” House Freedom Caucus spokeswoman Alyssa Farah told the Washington Examiner.

The House Freedom Caucus made the move after the Senate failed to pass the repeal-only aspect of the bill last month, despite similar legislation passing in 2015.
According to Freedom Caucus Chairman Rep. Mark Meadows (R-N.C.), it’s time for members of Congress to keep their “promise to the American people and repeal Obamacare and replace it with a policy that works for American families.”

“Republicans already sent this bill to president Obama in 2016, when they knew he would veto it. The only thing that changed about the bill since then, is that with Donald Trump as president, this bill would actually be signed into law,” Rep. Walker said in a statement. “This repeal should be the bare minimum Republicans pass on Obamacare as it fulfills the promise we all made to repeal Obamacare. I look forward to signing this petition on the House Floor when we return from recess.”

“In order to successfully force the bill out of committee, the petition needs a simple majority of 218 signatures to pass.”