CNN “…we’re out there trying to manipulate governments”, under fire for #fakenews, more likely voters distrust the news.

CNN has been under attack for allegations of producing #fakenews. Activist James O’Keefe’s Project Veritas released another undercover video proving the allegations. The latest is in response to the on-going “Trump-Russia collusion.” O’Keefe’s video shows CNN producer John Bonifield stating “I mean, it’s mostly bullsh** right now. Like we don’t have any big giant proof.” In the video, among many other things Bonifield stated “…we’re out there trying to manipulate governments”

In the video the producer goes on to say that the News is a business and to ignore journalism ethics.

“It’s a business,” said Bonifield. “All the nice cutesy little ethics that used to get talked about in journalism school, you’re just like, that’s adorable, that’s adorable. This is a business,” he said. “So they gotta do what they gotta do to make their money. I think that there are a lot of liberal CNN viewers who want to see Trump really get scrutinized.” John Bonifield, Senior CNN Producer

The obsession with “the Russia thing” and President Trump is not new and has further fueled the President’s narrative against “fake news” a term coined during the presidential election campaign by Donald Trump.

The fake news narrative validates what many moderates and conservative has long rallied against; media bias. Read our recent op-ed here. The latest scandal at CNN has resulted in the forced resignation of three journalists and additional scrutiny, allegedly, by CNN editors over any Trump-Russia story.

The issue in credibility and the willing bias to chase a story that does not exist does not end at this producer. Bonifield suggested that CNN’s CEO, Jeff Zucker is also steering CNN to continue the “witch hunt.”

President Trump, as he did during his campaign, has continued to use Twitter to attack and insult journalists. He banned some media outlets, notably CNN, from his press conferences. As President, he has continued this action. The latest is the banning of cameras at the daily White House briefings. CNN’s Jim Acosta has been the most “vocal” in the tantrums that he has thrown.

Acosta took to twitter to state that the briefings “were banned by the USA” and rallied for the media to have access calling on a patriotic tone “the public has a right to know.” In a series of tweets and live broadcast Acosta has let the President of the United States, and indeed the world, know that he is angry and his feelings are hurt to be insulted as a “fake news network.”

Four times recently that CNN had to retract or correct a story:

Acosta reported that Trump did not visit Scalise, and then issued a “correction” on June 14th.

CNN reported that only Democrats prayed before the Congressional Baseball game with a picture of all participants, Republicans and Democrats. CNN issued a correct on June 16 via twitter. 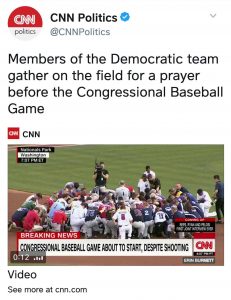 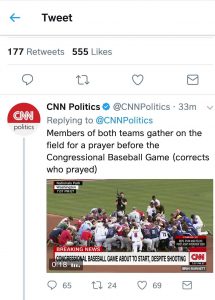 CNN retracted and apologized for a story that linked Anthony Scaramucci with investigations into a Russian Direct Investment Fund and stated in the retraction “That story did not meet CNN’s editorial standards and has been retracted. Links to the story have been disabled. CNN apologizes to Mr. Scaramucci” 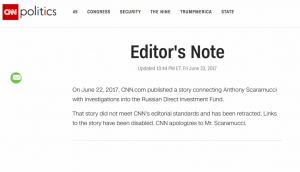 This may be the answer your below stated question, Mr. Acosta.

Has the media treated President Trump worse then President Obama?

With the win of Rep. Karen Handel in Georgia’s 6th District, CNN was one of the last to call the election for Handel, doing so hours after the AP. This still-shot from that night’s broadcast says it all and was captured as they cut away from Handel’s victory speech:

A study recently released from the Media Research Council found that ABC, CBS, and NBC provided:

Since President Trump took office, over 550,000 new jobs have been created and the stock market has reached an all-time high, spiking by more than $3.5 trillion. The economic optimism is at a high not seen since 1984.

Former FBI Director Comey stated under oath that Trump was not under investigation, including ties to Russia.

In response to the backlash from the “fake news” stories being pushed by CNN, host Brian Stelter titled a newsletter “White House vs. CNN.” Among the defensive tones about CNN standards he had this to say:

“But there’s an alternative view, popular on partisan web sites and social media, that is straight-up “anti-journalism.” These activists and commenters don’t promote accountability, they promote resentment and hatred. They claim that most, if not all, journalists have sinister agendas… that newsrooms are occupied by “enemies of the people…” and that the evil “MSM” is propaganda. These anti-J people claim that reporters routinely cover up good news and invent bad news. I’ve noticed a disturbing increase in terrorist lingo, like “CNN is ISIS,” a phrase promoted by Alex Jones. This Tuesday night Breitbart story also invokes CNN and ISIS in the same sentence.”

Some of this “anti-journalism” spin isn’t about eradicating bias or improving news coverage, it’s about trying to stamp out reporting altogether. It’s nutty, but it’s insidious, and that’s why I’m bringing it up. Millions of Americans are exposed to these extreme views every single day through social media…”

CNN, along with other networks, have taken the victimization approach. This approach does not address the fundamental issue; media bias.

“At what point does this become dangerous?” Ward asked CNN reporter Chris Cillizza. “I’m not just talking about dangerous in terms of tearing at the social fabric. I’m talking about dangerous as in a journalist gets hurt, because I can tell you [from] working overseas in war zones, people are emboldened by the actions of this administration, emboldened by the all-out declaration of war on the media.”

“Have you raised the concern all of us in the news media have about the president calling us enemies of the American people? Because that is a very, very harsh statement and potentially very dangerous,”

Perhaps the real example being set is in fact by the media that one is not responsible for ones’ actions. The media bias has become a norm in our society and it has gone largely unchecked by viewers and sponsors.

A June 21st Rasmussen Poll indicated 20% of Likely U.S. Voters believe news stories that are based on anonymous sources.

“The new poll found that 75% of those polled watch at least some cable news (24% say they rarely or never watch cable news networks for politics). Out of that number, 42% watch Fox News, 35% CNN, and 19% MSNBC.”

In January, Rasmussen found that 75% of likely US voters watch Cable News for political news at least occasionally. Fox News viewers polled at 50% trust Fox News, compared to 43% that trust MSNBC and 33% who tune into CNN. In total, only 37% of those polled trust the news that they are getting.

A poll in September 2016 indicated that only 88% of Trump supporters believed the media skewed the facts while 59% of Clinton supporters trusted the media.

These polls suggest the “fake news” debacle has some truth. The media’s response has been to double-down, spin the victimization, and continue to disregard the fundamental problem of ethics and standards in journalism.

The media, in particular CNN, has continued to make the story instead of reporting the story. Journalism 101 relies on the notion that “we report the story, not become the story”. The narratives this week are on the lack of video and camera’s at the daily briefings, President Trump’s threat to end the press briefings, and reading between the lines.

In a headline recently a major outlet reported the “creepy comment” made by President Trump about an Irish reporter while on the telephone with the Irish Prime Minister. The headline read something like “President Trump called out for singling out Irish Reporter in the Oval Office: Just Creepy” and “Donald Trump’s creepy flirting with Irish TV reporter in Oval Office”, and “Trump interrupts call with Irish prime minister to hit on Irish reporter”. The comment to create the flurry of “creepy comment was specifically “She has a nice smile on her face so I bet she treats you well” President Donald Trump.

This is an image of the situation when said “creepy comment” was made.